I have two babies named Maggie and Molly. Maggie is a blue tick beagle. This means she is a beagle but she has the coloring of a blue tick hound. Maggie is 13 yrs old now.
Maggie is our moocher! She'll do anything for food!! LOL She loves it when the grandkids come because then she gets lots of food!

Molly is a German Short haired Pointer. She is 8 yrs old.  She drives us CRAZY! LOL  She eats everything she gets ahold of. But she is such a sweet baby. She has a gentle nature but she is part goat! Actually she is purebred and beautiful but I just wish she would learn to be a lady! She is a tomboy for sure! LOL

I love her to death but she is such a thief! She has even gotten so bold as to jump up at my work table with me sitting here and tried to steal a plastic container that had been my dessert!  I caught her at this last night!

I can't give her a sheet or blanket to lay on as she will strip it over time and eat it. Makes a mess outside!
She has eaten kid's socks and I have found baby socks whole outside! She eats small toys and any thing she can find. Her favorite is paper of any kind but especially napkins. She loves loves napkins. Don't know why!

She has a phobia about rain. She hates to go out to do her business when it is raining!! LOL This morning I got up and went to the door to let her out and she stopped in her tracks and looked outside at the rain. She refused to go outside! I have in the past had to throw her out literally and she is very strong and no light weight!!
I put my arms around her and talked in her ear. I told her I know she doesn't like the rain but she HAD to go outside whether she wanted to or not!!  I let go and opened the door and she tripped right out the door!! Just as if for all the world she knew what I said!! *Grin* 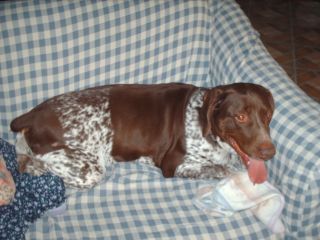 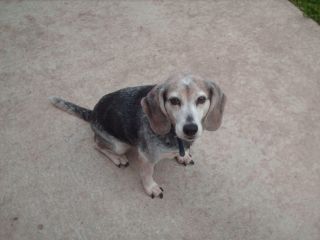 Maggie does several tricks. She will sit lie down and roll over for a treat.
But she does more of an in the air flip anymore than a real roll over! LOL
And she has to have carpet under her or she won't do it!

She was outside and I was trying to get them to sit for this picture. She thought I wanted her to roll over and she actually did it on the concrete! I was so surprised! But her love of treats over ran her need for a soft surface! LOL

She and Molly both can sit and I put a treat on their nose and they flip it and catch it --at least part of the time they catch it!

Another thing I taught them is  they have to sit on command. Head has to stay up as I put treats on the floor by their paws. They can't look down and they have to stay still until I give the release command.
They both do this quite well. Then I say okay and they SNAP up those treats right now!

The one thing Molly DOES NOT do well is to come when she is outside. She will come to my DH but not to me!! Frustrates me! Inside she minds perfectly most of the time. Outside all bets are off!!

They both spend most of their time around my feet as I work at the PC or on my sewing machine.

Here is my grandson Jake
playing tug of war with Molly 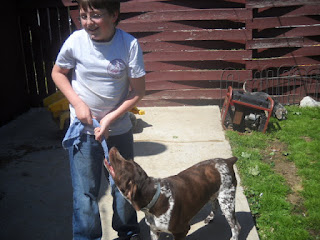 Posted by Rhonda at 5:06 PM No comments:

You can find all of my BOMs on my website - http://www.piecencutpatchwork.com/boms