I just have to share  a few more pics of my babies!

This is my grandson Colton  9 mos He was standing looking out and I couldn't get him to turn around and look for a picture so I went outside and took this  through the door! Sooo cute!!  If you look you can see his two little teeth! 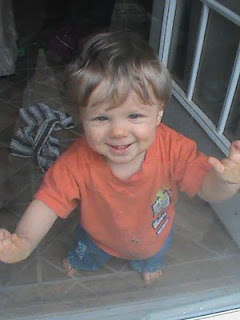 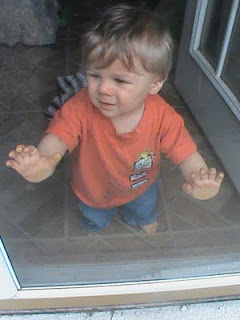 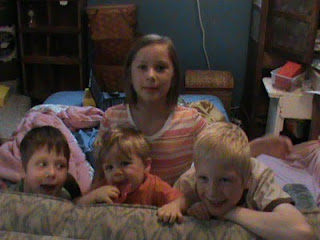 The twins and Colton came Thurs night and Rachel came Fri aft. They went home this aft. Love my grandbabies of all ages!!!

Tip of the Day - Using Tacks Instead Of Pins

I use a tack instead of using a pin. I put a single stitch across the seam where two seams match and you are going to be sewing across there. Then I also tack at the edge where the two fabrics match. I think a tack works better than a pin. Fabric still can move a bit with a pin but not with a stitch or tack.

Here you can see I used a tack to sew across the seams where the seams meet or match. This will keep the seams from moving and being off when you are done. 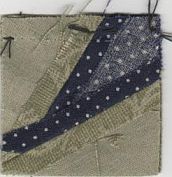 This is two Blocks face to face and I tacked on each edge and in the middle. This is a Star Point Block so I matched the seams in the middle and tacked them to anchor them so they won't move. I will sew across the tacks from left to right and you won't have to take them out. Always put your tacks where you are  going to sew the seam and not on the top. If you put them on top you will have to take them out when you are done.

This is two sets of two blocks sewn together. When sewn this will be a 4 patch. I tacked on the edges and I tacked in the middle where the seams match up. It may take a bit of time but  I think it is well worth it.

When I get ready to do this step I thread several needles and have them ready to use.
Posted by Rhonda at 11:24 AM No comments: