A Little Bit More About Me!

Quilting is a big part of my life but my husband of 36 years and my family are the bigger part of my life. My grandkids range in age from 23 to 9 mos. We have 15 grands if you include the two grand in laws and the great grandkids. Then we have a great granddaughter Serenity due in Dec! Can't wait to meet her and hold her close!!  Fortunately all of my  kids and their families live within a half hour of us. Except for one granddaughter and her husband and little girl Adrianna(almost 2). They live about an hour and a half from us. I don't get to see them as often as I'd like but we do get to see them from time to time.

My oldest my daughter Sara has 3 kids Joey 12  Zachary 10 and Rachel 9. Zachary was born with autism. He is a great kid and has progressed so much more than we ever thought he would! He is high IQ so he is considered a high functioning autistic. He is very loving and very onery!! He has a great sense of humor!! He was diagnosed really early because Sara had had some early childhood training when she and I ran our own daycare and she took some classes when she worked for another day care in the 2 yr old room. She recognized early on when Zach was about 18 mos that he was not progressing right. Physically he has always been at the top of his age group but he wasn't responding to us and he would ignore us. So she took him to the dr and discovered he had fluid in his ears which meant he couldn't hear us. So they put in tubes. We thought that would be the end of the problem but it persisted. He still didn't respond or try to talk or pay any attention to anyone.By the time he was 2 she had had him tested and he was diagnosed with autism. Two teachers came into the home and worked with him. One came on an aft and the other came one morning a week. They are the reason I believe that he is doing so well now. He has worked with a teacher since he was 2 which is very rare for any autistic to have intervention that early.

I think I will stop with Zach's story here for now and will continue this another day.

I love to spend time with my grandkids! I have grands about 3 days a week usually. Most weekends from Fri to Sunday I have grandkids. Love them to bits!!!


Of course I spend alot of my time quilting and designing. But I am a gamer and I love love love games. I grew up playing alot of croquet as it was a family pasttime with my dad and my grandpa and uncles and cousins all playing. Dad hung up a light on the garage so they could play in the dark! Croquet was a serious game in our family! LOL  I also played alot of carrom too. It is an old fashioned board game that has a large 3 ft game board that has pockets on the corner like a pool table. T he rules are very similar and it is played with wooden or plastic rings. There are green carroms and red carroms. One black carrom is the same as the 8 ball in pool. You don't want to put it in before it is time to put it in or you pay a fine! You have to take out 8 of your carroms and put them back on the table or choose to lose. My dad could do all kinds of trick shots and I can do a few. Can't get anyone to play carrom with me anymore.

I love to play solitaire and when I was in high school I taught myself to do 12 differant versions of solitaire for a speech in speech class. I have learned several more since then. I was raised Quaker and Quakers don't allow card playing as it leads to some not so terrific actions. But I was allowed to play solitaire at home. I taught my grandson Jake to play King's Corners which  is a double solitaire game. He loves to play with me when he comes.

I play alot and I mean alot of Spider Solitaire on my pc and I play Text Twist. I love word games. I am an only child so I guess playing games has been a big part of my life forever!! LOL  I also love hidden pictures games. Puzzles like Rubiks Cube and similar puzzles are so much fun.

well that is a little bit on me for now!!

Wishing you all sunshine and  laughter!!
God Bless and Keep You in the Palm of His Hand!!

This pattern is the second one in my Simple Steps pattern line.  Once you learn to make my "Blocks" - my shortcut methods- then this quilt block makes an intricate looking quilt block with simple steps.

To see my free Block directions go to my free teaching site - http://www.bitsnpiecesworkshop.com

To order this pattern you can click on the quilt block 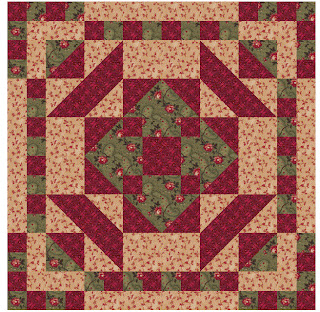 One of the 4 quilts