Finally got a picture of all 4 of my great grands. My grandson Cody has 3 kids now- Alisha 6 Jayden 3 and Serenity who is now 2 1/2 months old. She is growing so fast!  And Cody's younger sister Nicci has one little girl Adrianna who they call Bug. Love them all. They are all so cute and so busy!! Except Serenity LOL She isn't so busy but as she gets older I am sure she will tag along with the older ones! 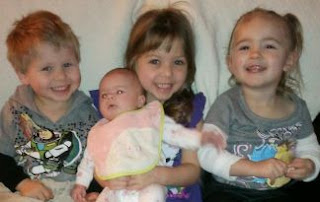 They are my son Nathan's grandkids and I still have a hard time with Grandpa Nathan! LOL  but he loves kids and spoils them rotten every chance he gets. Cody was aggravated with Nathan for giving into Alisha's pleas for a sucker but I told Cody spoiling them is what being a grandparent is all about!

Cody had a good role model for being a dad in Nathan. Both of my sons are great dads. Strict at times but totally involved with their kids lives. I had to laugh at my son who gave me a few gray hairs. Nathan is an electrician and works out of state alot. When his daughter broke up with her long time boyfriend Nathan drove 5 hrs to get home to be there for her. Then drove the same 5 hrs back to the job site the next morning. then the next day ended up driving that 5 miles back home again for his son who ended up in the hosp with appendicitis. Now he has learned what it means to do for your kids!!  these two and their younger brother are Nathan's step adopted kids!! They came with mom when they were 4 6 and 8 but Nathan who was 19 when he married Jill  is the only dad they have ever had. He was a hands on dad from the start. He would put them in time out on their beds and sometimes forget to let them up! LOL

He took them fishing and hunting and spent time rough housing with them and doing things with them. My husband  Nathan's dad was that kind of dad too. He taught them to hunt and we did alot of fishing with the kids when they were growing up. I like to think we taught them some good things! LOL


My other son Glen is a great dad too, He is a more relaxed laid back person. He doesn't let much bother him. Whereas Nathan has more of a hair trigger temper he has learned to control over the years. Glen just lets things roll off his back. If it isn't touching him personally he ignores it.

He replaced a built in stove for my mom -Glen is also an electrician- and while he was hunched over on the floor working his twins who were about 4 at the time were climbing all over his back.  When mom and I started to stop them he said let them be. They are fine!  He is pretty good with them. But he is what I have always called my black and white kid. It is either white or black and no gray in between. So when the kids do do something to get in trouble he is strict with them..  He has one twin Daymon who is extremely stubborn. He will retreat within himself when he thinks he is in trouble. When he was about 4 Daymon wouldn't answer his dad. So he got put in time out on top of the table of all places! But he stubbornly sat there and wouldn't answer.  Glen swears the kid will sit there or stand in a corner for hours rather than give in.


All 3 of my kids live within a half hour or so from us. I am glad they aren't any farther than that. Glen and Angie are  more like 45 mins from us now but they used to be 2 1/2 hrs away so I am happy to have them closer.

I see my daughter the most of course. She has been my right hand since she was born. I am close to my boys too but in a differant way.  She and I talk alot on the phone. At least every couple of days if not several times a day sometimes. She has alot to deal with with 3 kids with special needs.
Joey is 13 with ausberger's and ocd and tics and adhd. Zach has autism and is 11 now. Rachel has Russell Silvers Syndrome which means she doesn't grow much and she has several other related medical problems. She will be 10 on May 1st.  They are growing up so fast!!!
And she and her husband run a chiropractic clinic. Since her Father inl aw is now in poor health he can't run the office anymore so Sara has to be in the office every day now. It makes it hard for her to do all the things she used to do. They are very involved in their town. Ben is a chiro and a volunteer fire fighter as well as being the one to do all the paper work and ordering for the fire house. Sara is her daughter's girl scout leader and leader for both of her boy's cub scout troups. They go on a lot of camp outs with the Scouts. lots of outings and meetings she has to attend. My granddaughter in law has just joined as her daughter's girl scout leader and is attending the same meetings with Sara. So Sara has been helping Nicole learn the ropes.

This means we have 2 girls to buy girl  scout cookies from as well as a couple of friends of ours who also are in girl scouts! Then we have to buy from the boys when they sell popcorn and candy for boy scouts.
Seems like there is always something we have to buy from the kids. I bought cookie dough and butter braids from Alisha my great granddaughter for something not too long ago.

And Jayden is 3 and will be starting preschool soon so I imagine we are adding another kid to buy from! LOL   Well we love them all and support them when we can.

You can find all of my BOMs on my website - http://www.piecencutpatchwork.com/boms